This church, which was consecrated and opened in August 1924, stands on the site of the first St Joseph’s church, completed by Father Woods in March 1859 and dedicated by him to the loving husband of Mary and foster father of Jesus.

Prior to that, Mass had been celebrated on the same site in a former store, later designated ‘the first place in the township where public worship was held’ and ‘where the first footstep of civilisation was stamped on the South Eastern district’.

The Penola district was settled in the 1840s by those whom Mary described as ‘staunch old Catholics – most of them Scotch’. Adelaide priest Father Michael Ryan ministered to them on six visits made between March 1848 and November 1854, when another Irishman, Father Peter Powell, was appointed first resident priest. A ‘roughly built wooden store’ became his presbytery and church. 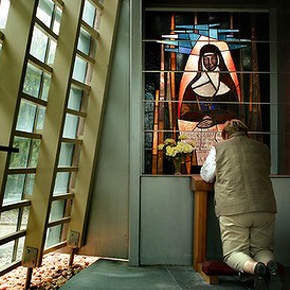 His successor, Father Woods, arrived on 19 March 1857, the feast of St Joseph, and two years later completed a stone church that he named St Joseph’s. This ‘beautiful little edifice, with its neat belfry’, was deemed to be ‘quite an ornament to our bonnie little town’.

That historic church, which Mary attended, was replaced in 1924 by a new St Joseph’s and later extended. An elegant brass chandelier from the old church hangs inside, and the wooden Pilgrim Cross used at Mary’s 1995 Beatification Mass celebrated by Pope John Paul II in Sydney is also on display.

The Mary MacKillop Shrine at the rear of the church was completed in 1998 and is a quiet place for reflection featuring a striking stained glass image of Mary. An earlier example of such craftsmanship, one of the ‘beautiful Gothic windows of stained glass’ from Woods’ church, can be seen in the MacKillop Exhibition.