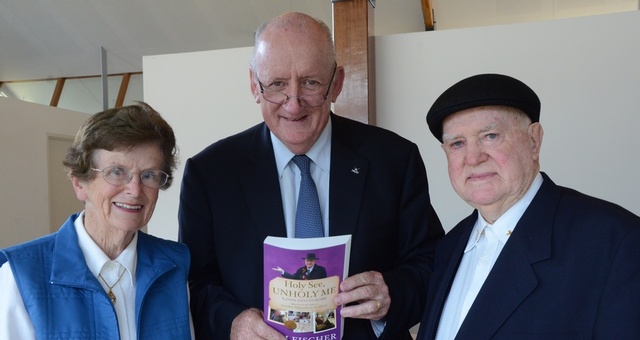 The Hon Tim Fischer AC returned to Penola for the launch of his book. On his previous visit in 2010 he presented the Vatican Flag which was flying outside the Penola Centre.

He gave a very interesting talk about his time in the Vatican which is outlined in the book. His appointment as first Australian Ambassador to the Vatican was a unique and most enjoyable experience.  While there he strongly promoted Coonawarra wines which were donated by vignerons and used at functions during the canonisation celebrations in October 2010.

Fr Paul Gardiner SJ lived in Rome for 18 years and was very familiar with descriptions in the book. He was Postulator for the cause of Mary MacKillop during that time and enjoyed close contact with Vatican officials. He declared the book launched and recommended it as an excellent record.

Other speakers were Mitch Williams MP, Member for MacKillop, and Joy Bowen of Bowen Estate who spoke on behalf of Coonawarra Vignerons. Mr Fischer signed copies and the book sold out on the day.