Remembering Mary’s departure from the South East at Port MacDonnell

How appropriate it was to celebrate the Feast Day of the birth of John the Baptist by ceremoniously remembering the departure of young twenty five year old Sister Mary MacKillop and her companion Sister Rose Cunningham from Port MacDonnell one hundred and fifty years ago. Mary MacKillop had been called by Father Julian Tenison Woods, Director of Catholic Education, to make the journey to Adelaide to “prepare the way” for the ministry of the Sisters of Saint Joseph to take root and flourish in South Australia. As John the Baptist announced the coming of Jesus to begin His public ministry, Mary and Rose were similarly prophetic in the selfless steps they took to make real to the poor the love and compassion of God.

As we engaged in a simple, moving ritual, Anne-Marie Matuschka and Sisters Loreto OConnor and Sue McGuinness tried to imagine what the young pair were experiencing as they walked along that jetty on 21 June 1867. They were preparing to board the small craft which was to take them out onto the larger vessel, the SS Penola, for the long, arduous journey to Port Adelaide. Words which came to mind included “courage” and “risk-taking”, “attuned to the Will of God”, “uncertainty” and “doubt” but also “trust” and “hope”. Having been driven in a buggy by Mary’s Uncle Donald MacDonald, how hard it must have been to bid farewell to family and step into an unknown future.

June 24 2017 was cold and grey. Threatening dark clouds hovered overhead as we stepped out along the jetty following in the footsteps of our foundress. Maybe the elements on that day in 1867 were similar to the ones we were experiencing. We, however, representing all those Josephite hearts which have been inspired and captured by Mary MacKillop’s vision over those 150 years, were full of awe, gratitude and praise. As the story board on the foreshores attests: “The bustling crowds on the jetty would have been oblivious to the life long journey which lay ahead for one particular passenger dressed in a simple black dress, yet the significance of that journey is now steeped in history.”

At the end of the jetty we prayed a simple prayer of thanksgiving. As the sun appeared, as if on cue, we retraced our steps, all the while marvelling at the foresight and courage of those pioneering sisters. Anne-Marie laid a wreath at the foot of the story board. This cites the significance of this site for pilgrims, tourists and locals alike. Her simple gesture remembered an historic event charged with meaning and importance. It was captured by us in a moment of shared wonder and gratitude.

Sisters Loreto and Sue sincerely thank Mrs Anne-Marie Matuschka whose passion for St Mary MacKillop and the Josephite story prompted this meaningful visit to Port MacDonnell. We acknowledge, too, the generosity of Michael, Anne-Marie’s husband, our chauffeur, who, like so many of the volunteers at Penola, continue in the spirit of that original journey to keep the story alive by their many acts of selfless kindness and thoughtfulness. 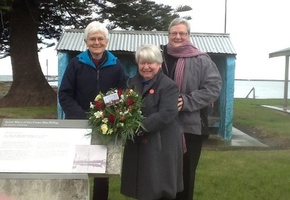