The prominent headlines on the front page of South Australia’s Border Watch described the recipients of the 2017 Australia Day Awards as “Pillars of our Community.”  Mrs Claire Larkin is one such “pillar”.

She has been worthily recognised with the Medal of the Order of Australia for her “service to the community of Penola.”  This service embraces a wide-ranging list of activities and involvements over the years, including a host of clubs and organisations – wherever the interests of her husband and children were. It is heart-warming to be able to publicly acknowledge the committed, generous service Claire has given to our community, but we are especially grateful for her dedicated work at the Mary MacKillop Interpretive Centre.

The joyful news of Claire’s Award was received with delight and gratitude by the Penola people, especially members of the Catholic parish community, and all Sisters of Saint Joseph.  Since her retirement from her work at the Penola War Memorial Hospital in 1995, where she held the responsible position of Chief Executive Officer, Claire has given herself tirelessly to the promotion of Saint Mary MacKillop through her leadership at the Centre as Chairperson and Co-ordinator. 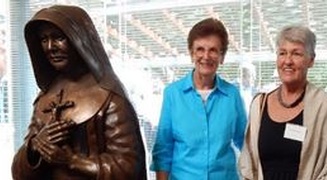 While she is the first to acknowledge that the strong band of volunteer workers enables the Centre to function successfully, no one would deny the significance of Claire’s vision and insightful leadership.

Claire’s devotion to, and love for, Saint Mary MacKillop is reflected in the spirit in which she carries out her works of service.  In mostly “hidden” ways, Claire ensures that the Centre is a welcoming place and that the environment is inviting. She leads very much by example and she treats everyone equally.  She listens with interest and attention, no matter how trivial or how important the issue. She attends to routine tasks and takes her turn on the volunteers’ roster, but she is equally at home accepting a high public profile at times and communicating with politicians, local councillors and members of the Churches. This was perhaps best illustrated during the times of both the Beatification and Canonisation of St Mary MacKillop where she was willing and able to respond to Media requests with wisdom, dignity and deep conviction. 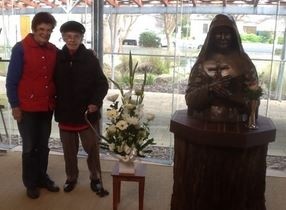 At Penola Claire enjoys the respect of members of the local business community and especially the Tourist Industry. She has availed herself of every opportunity to maximise the profile of the Mary MacKillop Centre in the wider community to the extent that in 2016 the Mary MacKillop Centre, Penola was listed as one of the 100 things in South Australia one must do before you die!

In acknowledging her Award at the Penola Australia Day celebrations, Claire expressed her belief that St Mary MacKillop has brought many blessings to Penola and its people. She recalled the fact that she has met many wonderfully inspiring people through her involvement at the Centre.  In her own inimitable way, she said simply and humbly, “It is an honour to be recognised.  However, I wish I could share it with all of the great people I have worked with over the years.”

The Sisters of Saint Joseph and the Catholic parish community of Penola salute you, Claire, and thank you for all you have done to keep the vision and the story of Mary MacKillop and Julian Tenison Woods alive.