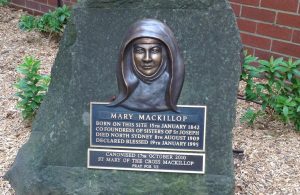 Article by Sr Joan Healy, republished here from SOSJ website. It reminds us that Mary didn’t shy away from helping those who needed it most.

In 1891, during a worldwide depression, the people of Melbourne city suffered greatly. Those who were rich lost their investments, those who were poor lost their work, the poorest were homeless and slept on the streets. The Archbishop of Melbourne had a heart for the poor and he talked to Mary MacKillop, the new Josephite in his diocese, about his worries.

A short stroll from the edge of Fitzroy, where Mary was born forty-seven years earlier, was the seedy part of Melbourne known as ‘Little Lons’. Those who lived here were in dire need. During the depression the population of this block peaked. Archbishop Thomas talked to Mary about Little Lonsdale St, with its maze of lanes where families, children, homeless people, street girls and criminals lived crowded together. He then wrote to assure her that, while the need was overwhelming, one would have to live in the area to do anything worthwhile. He wouldn’t ask the Sisters to live there. Predictably Mary replied, ‘Of course I have no objection to the locality, it is there that the real work lies.’ She and Sister Gertrude moved into two small houses which they called Providence. This was a name the Josephites coined when they had no idea where the money would come from. God would have to provide.

Sister Mary and Sister Gertrude would ask for food and donations of money; they found good hearted people among the Little Lons residents. Within weeks they gave shelter to homeless out-of-work servant girls, dispersed soup and clothing in the backyard, and taught ‘night school’ for children who worked during the day but were ready to learn at night. Mary’s sister, Annie MacKillop, who stayed for a brief time at the Providence, wrote, ‘It was a dreadfully noisy place—women screaming at night used to be so awful I thought it was murder’.

On the day of the Canonisation of Saint Mary of the Cross, a battery of TV cameras filmed Melbourne’s response to this event. They took images of a packed mass of humanity surging from the city, past Mary’s birthplace in Fitzroy to the Exhibition Centre where Aboriginal Elders, the Prime Minister, the Premier, the Leader of the Opposition, and leaders of many religions waited, crammed together on an outdoor platform in the threatening rain. But the platform was not the favoured image of the media. The image was of ordinary people walking, pushing, marching and even dancing. The camera lingered on the feet: moccasins, runners, working boots, plastic high heels, thongs, silver slippers… the feet of tiny children too.

Into focus came a pair of worn-out boots tied with string. The camera panned to a large, bearded, weathered man who seemed to have been sleeping rough for many a night. ‘What do you think about Saint Mary?’ ‘She cared about the poor and disabled’, he said. He paused, gazed belligerently at the camera and added emphatically, ‘She was a Saint before she died’.

Those whom Mary would have claimed as her people have never forgotten her.